The Pro-inflammatory Diet - Most of us Choose Sickness over Health

Your body works very hard every single day to maintain all of your chemical and physical processes in a steady state – your breathing, your temperature, your heart rate, and of interest today, your pH.   pH is a measure of acidity and in a healthy individual, your blood pH is maintained between 7.35 and 7.45 (pH is measured on a scale from 1 to 14, 1 being the most acidic, 7 being neutral – like water - and 14 being the most basic). As we can see, our blood is normally slightly basic.  Consuming foods that are acid-producing can cause your blood pH to lower (become more acidic).  If this happens, your body must work to raise it back to the normal range, as a significant fluctuation from these normal values can be fatal.  One of the responses your body will have is to begin breaking down bone and muscle to release ions into the blood stream that will bring the pH back to normal.  Over time, this can lead to decreased bone density.  Additionally, the excess acid can lead to kidney stone formation, liver disease and increase your risk for other illnesses such as cancer, heart disease and diabetes2,3.  Because acid is very reactive, it can cause a lot of tissue damage, especially in your digestive system.  “Leaky gut” is a condition in which your intestinal lining becomes porous due to chronic irritation from diet-induced inflammation1.  In other words, eating a diet that produces acid on a regular basis can irritate your intestinal walls to a point where gaps start forming between the cells, allowing chemicals and fluid from your intestines to seep out into your body and cause more damage1.  Autoimmune diseases have been linked to Leaky Gut Syndrome because the body is at a constant state of defense, attempting to fix the problem and protect the body from the leaking chemicals1.

As a general rule of thumb, foods that are light or white in color are going to be the most acid-producing.  These foods should be limited in the diet as much as possible.  Here is a list of common acid-producing foods: 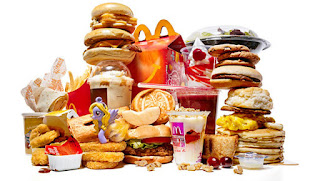 
Many of the foods on this list are quite delicious, making it difficult to avoid consuming them.  However, you don't have to eliminate them from your diet entirely.  As a matter of fact, many of the foods mentioned can offer important health benefits.  The key is eating a well-balanced diet with plenty of fruits and vegetables, which will help to ensure that your body maintains a normal blood pH and reduces the amount of inflammation present in your body.  If you know that you’re consuming a very pro-inflammatory diet, you may also want to consider supplementing with some antioxidants such as Vitamin E and Vitamin C.  These will help  to soak up “free radicals”, very reactive ions that result from chemical reactions in the body, cause tissue damage, and have been linked to cancer development, due to their high capacity to cause damage to tissues.  However, be sure to talk to your doctor before starting any new supplements, dietary changes, or other lifestyle changes to ensure that it is safe for you to do so.

Do you have a topic in health or nutrition you'd like to see discussed? Send us a message on Facebook at facebook.com/nhwchiro and we will gladly write a post about your topic of interest!
Posted by Unknown at 12:31 PM No comments:

Chronic Inflammation - A Culprit in Many Diseases

Many of us have heard the term “chronic inflammation” used a time or two.  However, what does it mean and how is it affecting us?  In the most basic sense, the word “chronic” means “persisting or taking place for an extended period of time”.  Illnesses that are said to be chronic (like chronic back pain for example) are often seen as being permanent, ongoing, or in many cases having no cure.  In other words, chronic illnesses are often life long ailments.  The word inflammation on the other hand, describes a process that your body uses to respond to tissue damage or illness like bacterial infections and viruses.  The process is characterized by swelling, increased blood flow, redness and heat (think about what happens to your skin when you have a mosquito bite).  Inflammation happens all the time in our bodies to keep us healthy.  As a general rule, inflammation has huge benefits in fighting off illness, keeping us healthy and keeping us alive.  However, sometimes our bodies are exposed to certain factors that cause the inflammatory process to go into overdrive.  When your body is constantly in an inflammatory state, this is called “chronic inflammation” and can lead to several detrimental health problems.

As we can see, putting our bodies in a state of chronic inflammation can have some pretty serious long-term effects on our health and life expectancy.  This is just another reason why proper diet is so vital to leading a healthy lifestyle.  Making more informed food choices and choosing a diet that does not promote inflammation – which we will discuss in detail next week! – will allow you to live a happier, healthier and longer life!

GMOs Part 2– What we know and what we don’t! 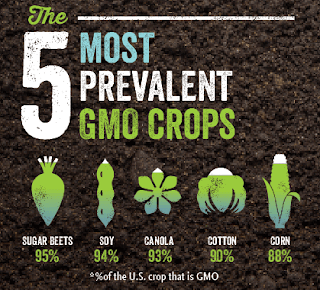 As was mentioned in last week’s post, “GMO” stands for “genetically modified organisms”.  For the purposes of this discussion, and as is referenced in food labeling, we are talking specifically about crops that have been genetically modified to resist herbicides and also to act as pesticides.  When an insect eats a GMO crop, it causes its intestines to rupture and the insect dies5.  This feature of course eliminates the need to spray pesticides and makes it a very effective at warding off insects.  The herbicide that GMOs have largely been created to resist is “Roundup” or “Glyphosate”, which we talked about in last week’s post1.   Glyphosate or Roundup (used interchangeably in the post) is sprayed on these GMO crops in relatively significant quantities to suppress the growth of weeds.  So, here is what we know: not all that much.  We know how exposure to glyphosate affects the health of animals, causing cancer, infertility, and birth defects1.  We know that direct ingestion of the chemical has the following side-effects on humans: mouth and throat pain, kidney and liver failure, trouble breathing, impaired consciousness, and more2.   We also know that most of the glyphosate that we ingest as a result of a GMO-filled diet is flushed out of our systems in the form of urine3.  But what about the glyphosate that isn't flushed out?  And what affect does it have as it is passing through our bodies?  These are things we don't know.  Well, keeping in mind the ramifications of GMO/glyphosate ingestion, what are the long-term effects on our health if most, if not all, of our food items contain some amount of glyphosate? If animal studies have suggested that they are linked to cancers, cause birth defects, and destroy our immune system, what is the effect on human health1?  Since these chemicals are fairly new to our diets, no long-term human studies exist.  As of yet, this is all of the information we have.  To wrap up, lets just briefly talk about the effect that glyphosate/GMOs have had on the environment since their introduction: Significant decline in the honeybee population3.  It is estimated that the US honey bee population has been reduced by approximately 30% to 50% as a result of these pesticides.  Honey bees are not only necessary in producing honey, but they pollinate all flowering plants – that includes plants that produce many of our foods, such as cherries, apples, potatoes, broccoli, strawberries, and many more.  Bees are absolutely necessary to our environment if we want to continue enjoying these foods.  Birds, butterflies, and other organisms are also perishing due to these chemicals3.  Be sure to come back next week for information on how glyphosate, through its use on GMO crops, could be related to a number of different illnesses that are now becoming more prevalent in our society.  Also visit our website (nhwchiro.com) and like us on Facebook (facebook.com/nhwchiro) for more information on natural and preventative medicine.

1. Fleming, A. GMOs Part I: Hold the Glyphosate!  www.nhwchiro.blogspot.com

Posted by Unknown at 7:28 PM No comments:

A Tour of our Office!

Welcome to our office! Take the tour with your Daytona Beach Chiropractor (me!) and see what it's like to be a patient at Natural Health and Wellness Chiropractic, LLC.
Posted by Unknown at 8:05 PM No comments:

GMOs Part I: Hold the Glyphosate!

This is the first of a series of posts surrounding information regarding the development, distribution, and effects of genetically modified organisms (GMOs) and the herbicides they are used in conjunction with.   Future posts will focus on describing GMOs in further detail, but for the sake of understanding the information presented, it is important to know what GMOs are.  In short, GMOs are plants that have had their DNA altered to act as a pesticide, and also become resistant to herbicides.  In other words, the plant itself is now a pesticide.  This particular post will focus on the strong herbicide, glyphosate, also known as Roundup, that is used to control weed growth in fields growing genetically modified organisms. 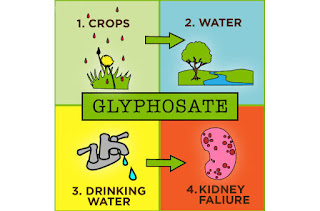 Glyphosate was introduced in the early 1970s by a company called Monsanto1.  Glyphosate attracted attention because unlike traditional herbicides, it killed virtually all plants, instead of being selective and only killing certain weeds.   Evidence1.  One study showed that glyphosate exposure is linked to birth defects2.   Another study showed that glyphosate exposure can cause infertility in males3.  Other evidence shows that glyphosate also destroys the microbiome in our small intestines that is vital for a number of highly essential functions such as immunity4.  Further studies found that the chemical is linked to cancer, including non-Hodgkin’s Lymphoma and Leukemia6,7.  Studies all around the world, even in areas where the chemical is not widely used, have shown that glyphosate is present in the urine of as many as 100% of individuals tested.  Even individuals who were not thought to have immediate exposure to this chemical were found to have levels in their urine that were higher than was deemed safe in the water supply5. 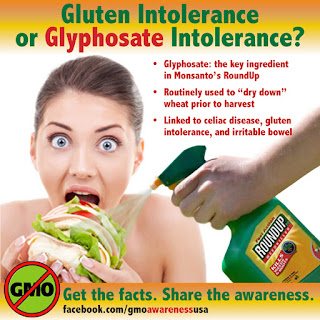 shows that this chemical has a variety of significant effects on our environment as well as our bodies
Based on the evidence, it would seem that most, if not all of us, are now exposed to this chemical and have it residing within our bodies.  How does this happen? And what can you do to minimize your exposure?  Glyphosate is sprayed on GMO crops to control weed growth.  Therefore, avoiding consumption of GMOs will allow you to significantly decrease your intake and exposure to this harmful pesticide.  Be sure to check back next week for more information on GMO crops and the effects they can have on our health.  If you’d like more details on this, and other topics in health and nutrition, please visit www.nhwchiro.com to download your free eBook!

8.  Natural Health and Wellness Chiropractic, LLC.  Learn more about your health at www.nhwchiro.com

10.  Photo credit: http://dailyhp.wpengine.netdna-cdn.com/wp-content/uploads/2014-08-08-epa-considers-glyphosate-ban-cycle.jpg
Posted by Unknown at 5:46 AM No comments: